Welcome to Cheltenham CAMRA, the Campaign for Real Ale. We are a voluntary organisation campaigning for real ale, community pubs and consumer rights.The Cheltenham Branch has around 850 members in the GL50, GL51, GL52 and GL53 postcode areas.

All Committee positions are up for election, so if you would like to help forge the future direction of the Branch, then why not consider standing? A list of the positions available can be seen using the “Branch” > “Committee” tab in the drop-down menus above. Please speak to the Secretary prior to the AGM if you would like a nomination form or download one from here.

All nominees must be of ‘good standing’ and require a proposer and a seconder, and must all be resident within the branch area.

Please ensure you have your membership card with you, as you’ll need this for any votes that are taken. If you wish to raise a subject for discussion, please email the details to the secretary, so it can be included on the agenda.

We need your help in assessing the viability of holding further festivals.  We will be holding a meeting on 14th January 2020 starting at 7:30pm at Sandford Park Alehouse where we will review the successes and failures from previous festivals and decide whether we should pursue further festivals or concentrate on other areas to promote CAMRA and real ale in Cheltenham, such as building on the successful Cotswold Beer Festival.

In order to assess the viability of the festival we are considering the following areas:

Please come to the meeting to provide your thoughts and potentially volunteer to join the beer festival organising team.

We would also like to hear from you if you can’t make the meeting but have some suggestions and / or are able to join the team. The agenda for the meeting can be found HERE.

Congratulations to The Beehive in Montpellier which has been voted Cheltenham CAMRA Winter Pub of The Season 2019.

The winter pub of the year award aims to recognise pubs that make an excellent venue to visit during the winter months. Winter is a time for sitting in a pub and enjoying a pint in front of a roaring fire.

Presentation of the award took place on Tuesday 7th January. 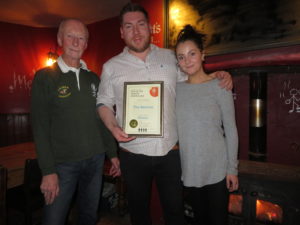 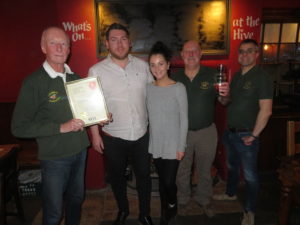 Congratulations to Cheltenham club of the year the Cheltenham Motor Club (CMC), which has once again reached the final four of the national Club of the Year (COTY) competition.

Appleton Thorn Village Hall is the current champion and both the CMC and Flixton Conservative Club are previous winners, so Neil faces tough competition! 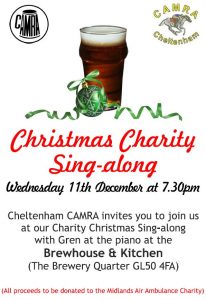 … is now over.  Many thanks to all our volunteers who helped with setup, take down and during Cheltenham Real Ale festival 2019. Hope to see you all again in 2020.

Join us at the Ladies’ College and enjoy 80 ales, including a number of vegan ales, and 27 ciders and perries. There’s hot and cold food and entertainment available.

There have been a few changes to the beer list for the festival.

This year’s Cheltenham CAMRA festival will have a vegan flavour. Breaking with the common practice of choosing real ales from a specific UK region or county, Cheltenham CAMRA will instead showcase the growing vegan beer sector.

Veganism, and an interest in vegan food and drink, is taking off particularly in places like Cheltenham, said festival committee member Grant Cook. So this year we have decided to make things easier by having a specific bay dedicated to vegan beers. This will give more focus on vegan beers and save people having to hunt round the hall to track down compatible ales from among the eighty or so available.

Vegan hot food will be provided by Hogless Roast.

Why is vegan beer different?

The majority of real ale in the UK is fined, producing the bright and clear beer we see in every pub. However, traditionally this has been achieved by adding Isinglass to beer casks. Isinglass is made from the swim bladders of fish and, although it sinks to the bottom of the cask and is not consumed, its use in producing real ale breaches vegan ethical principles.

Vegan compatible real ale can be produced in two ways. The first is to use a vegetable fining agent, either Irish Moss (an algae), seaweed or pea protein.

The alternative is simply not to fine the beer at all. This usually produces a haze in the final product, but the popularity among craft brewers for unfined beers has made this more mainstream in recent years.

All vegan friendly beers will be clearly marked in the programme, and we will have vegan street food vendor Hogless Roast to complement the beers, said Grant.  We will also have twenty plus real ciders and perries, which are all naturally vegan-friendly.

If there are any vegans who would like to volunteer to man the vegan beer section, or to help promote and explain vegan beers and food, then please contact crafstaff@gmail.com with your contact details, and we’ll get back to you.

Once again the venue is Cheltenham Ladies’ College, with the wonderful Princess Hall as the centrepiece. Festival dates are Friday 1st and Saturday 2nd of November. Friday will see the festival open from 4pm to 11pm, Saturday will be 11am to 11pm, and there will be live entertainment on both days.

With 80 casks of real ales, 20 unique ciders and perries, wine, live entertainment, and hot and cold food, we expect this to be a popular festival in our great festival town.

More detail about CRAF19 will appear on the Cheltenham Branch Website – www.cheltenhamcamra.org.uk/craf