Skip to content
» Day Trips » A crafty trip to Bristol

Cheltenham has a growing beer scene, but it is always good to explore the scene in another town. Bristol is an exciting city and is easily accessible by train from Cheltenham. A return can be purchased on the day for £8.80; however, timing is key, especially through the Parkway-Temple Meads pinch point, where the train can get very crowded.

On leaving the train at Bristol, our breakfast stop was The Knights Templar, a Wetherspoons pub near to the railway station. It’s a great place to have a pre-pub tour breakfast and we were lucky to find a couple of very interesting beers on handpump. On offer today (and duly sampled) was Acorn – Transatlantic IPA, a 5% golden IPA which is brewed with a combination of British and American hops. It’s a solid beer with an intense hop aroma and a harmonic level of bitterness in the flavour. Also sampled was Adnams – Enraptured: a brown IPA brewed with the base malts of Broadside (Pale Ale and Chocolate malt) and hopped with lots of Columbus, Citra and Summit hops. It is full of resinous, pine and citrus flavours backed up by sweet biscuit malts.

The Enraptured pump clip links back to Alchemist Brewery in Vermont, USA. A Brewery I can honestly say I have visited, tasted the beer and have the T-Shirt! Their flagship beer ‘Heady Topper’ appears in the top 1% of worldwide beers according to rate beer. It certainly knocked the socks off the regulars at Cheltenham Motor Club when they sampled some last year! 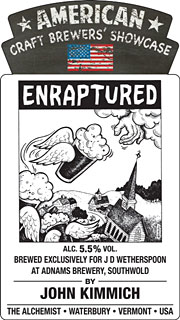 Our next stop was the 7 Stars, a small bar located next to a big music venue in a small alleyway. The real ale selection here is good, with beers available from far and wide and discounts for CAMRA members with valid CAMRA cards. We tried the Citra by The Brew Co; however, it felt uninspiring compared to the two big American style beers that were being served in Weatherspoons.

Love them or hate them, BrewDog were next on the list. This young and trendy bar not only has a wide selection of BrewDog beers but also several other big names on craft keg. Stopping here was a great excuse to try Stone Sublimely Self-Righteous Black IPA (all the way from the USA) and the powerfully hopped Magic Rock Cannonball (from slightly closer to home in Huddersfield, but which could itself be easily mistaken for a US craft beer).

From BrewDog, you are only a couple of flights of stairs away from St Nicholas Market. This is a semi-open/outdoor food hall that caters for many tastes, from Caribbean to Pieminister Pies and BBQ to Thai and Indian Curry. Each of us sampled food from a different corner of the globe, with my choice being a Beef Brisket with Burnt Ends from Grillstock. Grillstock seem to have several outlets in Bristol and have been made famous by their BBQ sauce, which is a very popular purchase to take away.

After lunch, we headed to the Small Bar, the first bar in what is known as the Beer-Muda Triangle and one of three in King Street, which is turing into a mecca for real ale and craft beer. The Small Bar may disappoint those who refuse to drink their beer from anything other than a pint glass – the beers are served only in “schooners” (2/3 of a pint glasses) and halves – but, given the strength of some of the beers served, this is possibly no bad thing! We were impressed at the sheer range of beer styles that were represented on both cask and keg here, something you’re unlikely to find in smaller towns and cities such as Cheltenham. We took advantage of this by ordering the splendid Saison a la Provision from Burning Sky (from Sussex), as well as a dark beer from Fallen and Cromarty Rogue Wave (both from Scotland).

Onwards and upwards to The Famous Royal Navy Volunteer, one of of the second corners on the scalene triangle that had hold of us. We crossed the cobbled street and entered the large bar, where a screen was showing a torrential storm disrupting the cricket at Old Trafford. This brought back memories of my previous visit, when water had leaked into the bar area, but that’s another story. A year had passed since the “Volley” first opened its doors, so our visit coincided with their birthday celebrations. Facebook and Twitter were alive with people celebrating with them. 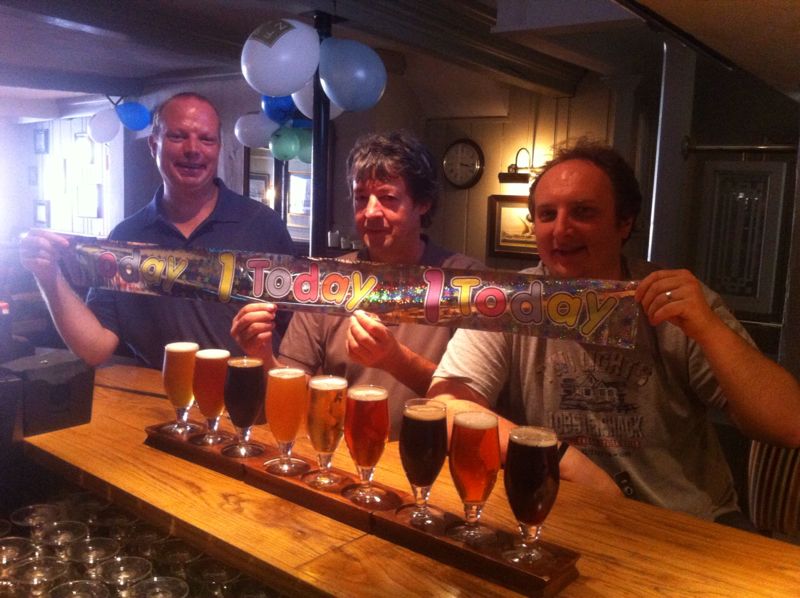 A low tech but effective beer board presented us with a mixture of cask and keg beers to choose from. There was more choice than any human could possibly need in life. In order to take advantage of this, we opted for the beer paddle, which comprises 3 third of a pint glasses, meaning we were able to sample 9 different beers. Again, we were impressed with the variety of styles on show, with the beers sampled including an IPA (Buxton Ace Edge), a Double IPA (Celt Experience Ogham Willow), a breakfast stout (Siren Craft Brewing Broken Dream), a milk stout (Wiper and True Milk Shake) and a lager (Williams Brothers Caesar Augustus).

On to the last corner of the triangle: the Beer Emporium. As you leave King Street, you are greeted by what appears to be a bottle shop. You then adjust your compass bearing to the right, head down some stairs and into an interesting underground bar. On previous daytime visits, we had been a little disappointed to find that many of the handpumps were not in use. Today, though, we had a full complement of interesting beers from the likes of Arbor, Siren and many other great breweries to choose from. Little did we know it, but we were about to purchase what was universally agreed to be the beer of the day here, namely Neither IPA. This is a collaboration brew from Siren, Cigar City and Grassroots, and is a hoppy double IPA brewed with corn and wildflower honey. We detected grapefruit and tropical fruit flavours, which made it most refreshing but also dangerously drinkable!

We were in serious danger of being swallowed up by the Beer-Muda Triangle, but somehow managed to escape its clutches and head out into the afternoon sunshine in the direction of Hotwells, passing Bristol’s council offices and its magnificent cathedral. We had a plan to get to the Grain Barge and then head back towards the station. One factor to bear in mind when planning a visit to Bristol is the time of the last train home – one thing we often notice on trips like this is that time flies when you’re having fun, so make sure you allow yourself enough time to visit all the bars you want to go to. With several bars still to do, therefore, our plan to catch the 8.30pm train was soon shelved in favour of the last direct train back to Cheltenham, which departs Temple Meads at 10pm. Note that, if the worst happens and you end up missing this one, it is possible to get the 10.54pm train as far as Gloucester, although this involves a change and 40-minute wait at Severn Tunnel Junction. Probably best to avoid this one: much as we enjoy our visits to Wales, a 2-hour journey time and nowhere in the vicinity of Severn Tunnel Junction to pop to for a swift one can put a bit of a dampener on things!

After our walk through the hustle and bustle of the city centre, it was nice to reach the altogether quieter area in which the Three Tuns is situated. Though Arbor Ales’ tap bar, the selection here is by no means limited to offerings from this local brewery. That’s not to take anything away from Arbor – they brew some wonderful beers – but our intention was to sample ones that we don’t usually see in Cheltenham and their ales can often be found at Cheltenham Motor Club. With this in mind, we ordered ReAle Extra, an IPA from Italian brewery Birra del Borgo, and a raspberry-flavoured beer from their compatriots Toccalmatto. A destination for a future beer trip, perhaps!

Our next port of call was a 5-minute walk from the 3 Tuns. The nautical reference is actually rather apt, as it was the Grain Barge, a floating bar that predominantly serves beers from Bristol Beer Factory. With the taste of the hops from the IPA at our previous stop still lingering, we were hoping for a similarly hoppy beers such as Southville Hop. However, as this was only available in bottles, we settled for Nova. In their description of the beer, Bristol Beer Factory refer to the “bright, fresh and zesty hop aromas…underpinned by herbal and floral notes”. The depth of flavour belies the mere 3.8% ABV. Taking our seats on the top deck, we were able to see the start of the evening’s Bristol Balloon Fiesta ascent, with around 30 balloons taking off from nearby Ashton Court, flying along the water, past the SS Great Britain and over the harbourside area. 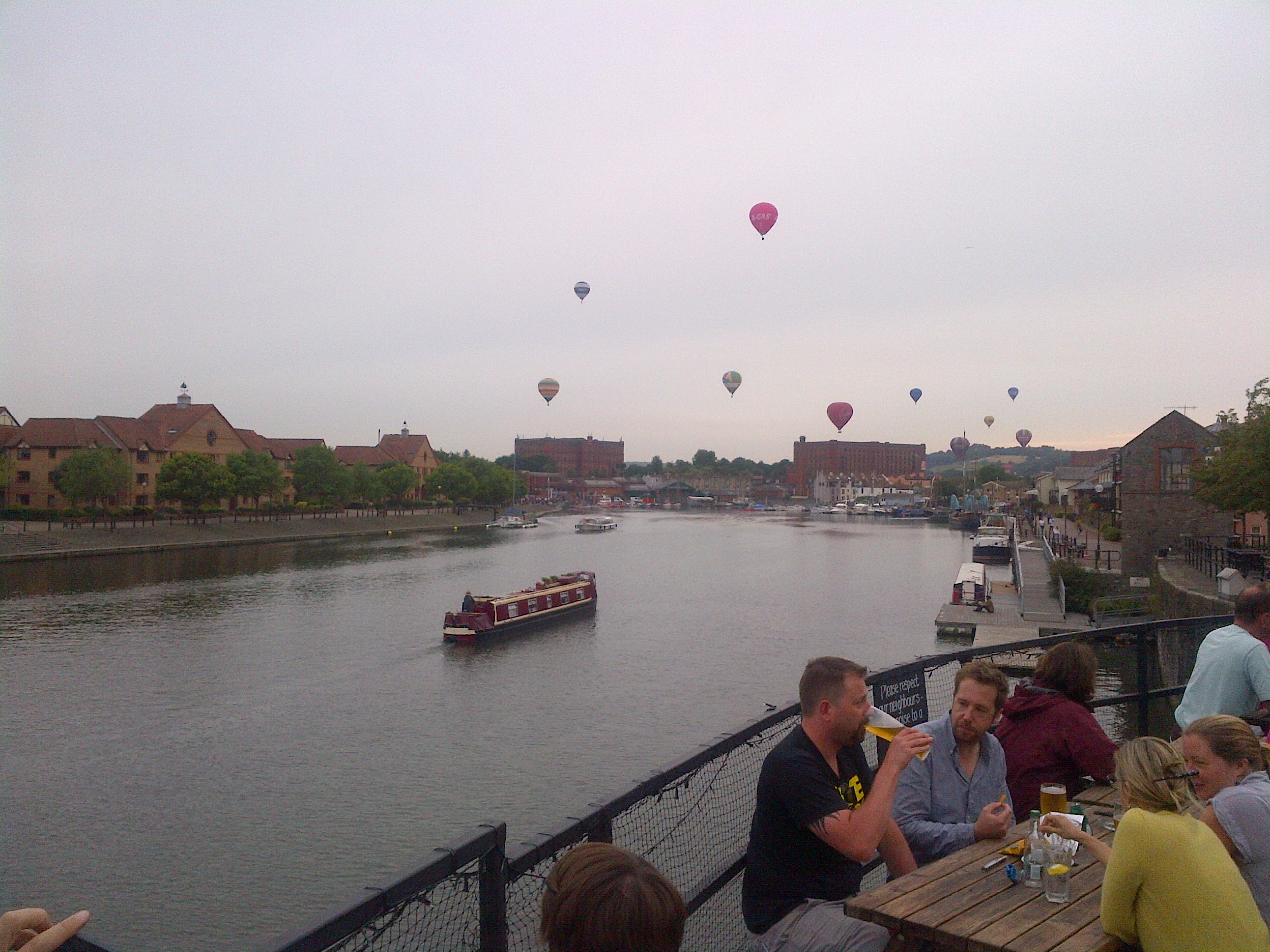 Next was the Bag o Nails, or “Bag of Cats”, as some call it. The pub is owned and run by Luke, a real character who took the pub over a few years ago when many feared that it had closed for good. Customers are greeted by an interesting sign on the door which reads “No Idiot Pub Crawls”, while entertainment is provided by Luke himself, as well as a record player in the corner of the room playing vinyl. When ordering, you may find that space on the bar is limited, as it is often taken up by one or more of the pub’s resident cats! Luke had recently hosted a beer festival and still had a 10% imperial stout on – Green Jack Baltic Trader – which we felt obliged to try. He had also recently had more cask lines installed.

We were now firmly set on catching the 10pm train, while not discounting the possibility of an impromptu late night trip to Wales! We were at the end of the line and needed to head back along the branch line back into the city. Knowing there were many beers that we hadn’t tried earlier, our plan of action was to revisit the Small Bar and then head for the Barley Mow, before heading back up to Cheltenham. King Street in general and the Small Bar in particular had become a lot busier in the meantime and it was now standing room only. Offices had closed and people had started to celebrate the onset of the weekend. It was also noticeable just how many beers had changed since we called in earlier in the afternoon, which is testament to the bar’s popularity. This time, we had beers from Bad Seed and Tiny Rebel.

The Barley Mow is hidden away in the back streets behind hotels and flats near Temple Meads railway station. Recent development of the area has made it even harder to find than before, but is definitely worth the effort. The Mow has a consistent diet of exciting beers, so plenty to chose from here as well. Calculating that we had 20 minutes to order and consume our beers, the final selections included halves of Supernatural IPA from New Bristol Brewery – one to watch – and Long Lane Pale from Liverpool Craft.

SUMMARY We managed to hit Bristol on a really good day and were lucky enough to come across a number of amazing beers and very few poor ones. We were in one of the most diverse places around for beer. Neither IPA by Siren et al was voted beer of the day. Though slightly cloudy, the taste was absolutely delicious, which just goes to show that it’s always best to drink with your mouth and not your eyes! 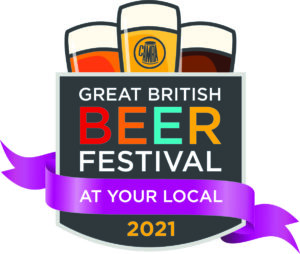