Skip to content
Clubs News Pub of the Year Pubs

Cheltenham CAMRA announce Club and Pub of the Year 2015

For the first time the Campaign for Real Ale’s Cheltenham branch have decided to announce the winner for both the Club and Pub of the Year in a novel way. Branch Chair, Veronica Emary said: “We are a new CAMRA branch, so we thought we would try something different. Instead of just announcing the winner of each award, we decided we would also include two finalists. The reason for this is to give recognition to those pubs, landlords and staff who were very close to the top prize, and to encourage everyone to put in that little bit more effort to get into the top three. Real ale drinkers in Cheltenham are seeing standards improve in many of our pubs and clubs and this is one way of demonstrating that fact.”

The winner of the Cheltenham Pub of the year award for 2015 goes to the Sandford Park Alehouse. Winner of the Pub of the Year award in 2014, the High Street pub only opened in April 2013. In that time Grant Cook and his team have built a strong reputation for quality and choice – the number of different draught real ales served has just passed 1,000. In addition to the regularly changing real ales there are 16 craft keg ales, 80 bottled world beers, good food, bar billiards and a beer garden next to the river Chelt. 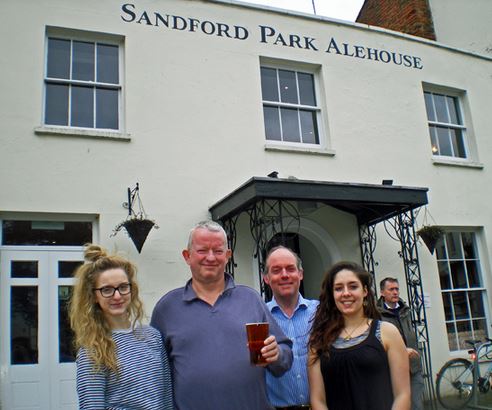 The other finalists this year are the Jolly Brewmaster and the Royal Union. The ‘Jolly Brew’ is a multiple past winner of this award and is the current Cheltenham Cider & Perry Pub of the Year. The Royal Union, a winner of a Pub of the Season award, continues to impress with a selection of great beers and beer festivals, like the week-long Welsh Beer Festival, which runs until March 8th.