Could this be the new packaging for Real Ale?

If you have visited Favourite Beers or any other specialist beer shop in the last twelve months you cannot have failed to notice that beer in cans (generally the smaller 330ml packaging) is starting to monopolise more and more shelf space at the expense of bottled beers. Additionally, many good pubs and bars are starting to have a range of cans as an extension to their draught beer range. These cans bear little or no resemblance to the mass produced and highly pasteurised products (London Pride, Boddingtons, Abbot Ale, 6X etc.) that have been available in supermarkets for many years – you will find that instead of the cardboard-like tastes that are so often associated with these more traditional offerings, the new wave of so called ‘Craft’ cans are offering fresh, spritzy aromas and flavours that are a match for anything you will get in a good pub or bar.

My Own Journey with Canned Beer

Now I must admit that when I first opened Favourite Beers in 2010 I pretty much vowed to never have a canned beer in the shop due to the many prejudices I had built up in over the previous 30 years. In that time, I had many sub-standard drinking experiences, not just with the sorts of products mentioned above but also with the old style slabs of second-rate beers and even the old party sevens (now I am showing my age). However, I had my mind changed in 2011 when Brewdog first put their new recipe Punk IPA into cans. At that point I had resisted stocking any of the US craft beers that were starting to regularly appear on wholesale lists in cans but I was challenged by a colleague to do a blind taste test of the two different packagings of Punk IPA (bottle and can). ?I was somewhat surprised when I and two other friends all agreed that one sample was slightly fresher and hoppier than the other and that this turned out to be the canned product (although I did later find that the canned product wasn’t pasteurised whereas the bottled product was). Anyway, my previous prejudices about canned beer had been put to question and all I needed to do now was see how my customers would react to canned products.

I started off by just introducing three or four lines of very popular products (Punk IPA and three leading US brands) into the shop and although sales were sluggish to start with they definitely started moving over the next two years as I continued to expand the range. I think the big breakthrough came last year when a lot of UK breweries started to get in on the action, installing their own canning lines and making the effort to make their products look attractive as well as tasting incredible. This was definitely led by some of the leading London breweries to start with (Beavertown, Camden and Fourpure), but in the last twelve months I would guess that just about every UK brewery that puts their beer into bottles have at least considered making the move into cans, with many making the jump in recent months (Wild Beer Co, Roosters, Harbour, Purity, Dark Star, St Austell) and allegedly Moor Beer in Bristol about to follow suit!. I now have a range of over 40-50 products regularly available in cans at the shop and that number is growing all of the time.

So why is canned beer suddenly so popular?

The current trend, as with many that have driven the modern UK beer scene, first originated in the US. In 2002 Colorado based Oscar Blues became the first independent brewery to can a beer called Dale’s Pale Ale. This went on to win lots of awards and started a craze for canning across the Atlantic that is still going today. In fact if the UK had the same percentage of breweries canning their beers as the US we would have over 250, so there is still some way for us to go.

There are many advantages of canned products over bottles; from the perspective of the brewery, cans are lighter and smaller making them easier to store and cheaper to transport. ImageThey are opaque which removes any possibility of the beer getting ‘light-struck’ or ‘skunked’ due to contact with ultra-violet light and the canning process allows less chance of oxygen (the biggest enemy of packaged beer) being present in the can. From a consumers point of view they can be taken into places where bottles are not allowed or aren’t practical (music festivals, cinemas etc.), are less likely to break, easier to store and are quicker to cool down in a fridge. A lot of people still hold the belief that canned beers have a metallic tang to them; this is not something that you find in any modern cans as the manufacturing process creates an ultra-thin, water-based lining which stops the metal imparting any negative flavours to the beer.

The one area where the jury is still out is whether cans are any more environmentally friendly than bottles. Aluminium is much more energy intensive to mine, refine, process, transport, and shape into beer containers than glass is, but cans use less raw material, are cheaper to transport have a smaller footprint and are more likely to be recycled than bottles. As such it generally depends on how far the product has travelled to determine which is the ‘Greener’ option.

The answer to this question is a resounding YES. Many of the modern canning lines are enabling breweries to create ‘Can Conditioned Beer’ where just as with the bottled versions, the beer is allowed to undergo a secondary fermentation in the can with the requisite amount of yeast and fermentable sugars still present in the beer (Sierra Nevada in California were one of the pioneers of this with their Pale Ale). Other breweries (notably Beavertown and Fourpure) are fully conditioning their beer in tanks at the brewery and then canning the unfiltered and unfined beer, with the inevitability of some yeast remaining in the can – maybe strictly not can conditioned, but the flavour profile is very much the same. It would seem that these modern breweries are happy to risk their beers having a slight haze for the reward of great packaged beer with bags full of flavour (I can’t wait to try the new Moor cans!). One particular example I came across that particularly impressed me recently was from the Hastings Brewery, we managed to get two of their beers in cans for the shop, both ‘can conditioned’ and both very good, but their Mosaic Pale Ale was a real eye-opener for what is possible with canned beer now.

I asked Jeff Evans, the author of the CAMRA Good Bottled Beer Guide (which just lists bottle conditioned beers) whether for his next edition he would be happy to include can conditioned beers, this was his response: “Personally, I see no problem with including such beers in the next edition but it would have to be CAMRA’s call and I haven’t discussed it with them yet.”

Enjoy canned beers – but from a glass!

Finally, an important bit of guidance I would offer when consuming a canned beer is to (where possible) not drink is straight from the can – the whole experience of drinking and savouring a beer depends as much upon aroma as it does on taste and you don’t get much aroma when drinking straight from a can (unless it’s one of the new US style cans where the entire lid come away!). I hope you have fun discovering some great new beers in cans.

For the last ten years, Leigh Norwood has been an organiser of the Cheltenham Beer Festival (raising money for Cheltenham Samaritans). He is also an active member of Cheltenham CAMRA, a member of the British Guild of Beer Writers, a judge at the International Beer Challenge (and many beer festivals) and since October 2010 the owner of Favourite Beers – Gloucestershire’s only specialist Beer and Cider shop. 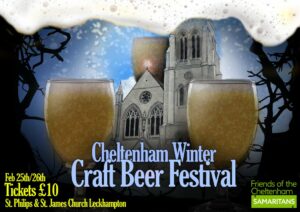