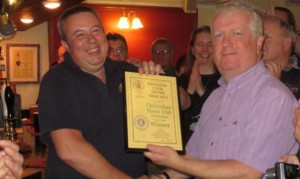 In late breaking news it has been announced that the club is a CAMRA Super Round winner and will now go forward as one of the four finalists for the title of CAMRA National Club of the Year.

Club Steward, Neil Way, thanked everyone present and said: “The club continues to source and serve a range of exciting beers and increasingly ciders and perries. Recent improvements have seen a new decking area, and replacement of the ‘corner’ bar with a full-width bar, which will be used for the extended range of real ciders and gravity fed real ales. We have more improvements and developments in the pipeline.”

Cheltenham CAMRA Press Officer, Tony Lucas, said: “Gloucestershire and the South West enjoy a great reputation for both the quality of the beer brewed here and the high standard of our pubs. Bristol in particular is a major destination for real ale fans. So for Cheltenham to collect both pub and club awards for the South West, and for both of them to reach the final four shortlist for UK Pub and Club of the Year” really puts the town on the map.

“The beer scene continues to develop here; the first Cheltenham CAMRA Real Ale Festival at the Town Hall attracted over 2,500 people. Somerset craft brewer Wild Beer recently opened an exciting new pub/restaurant in Cambray Place and several other new pub/restaurants are due to open in town.

“Everyone in Cheltenham CAMRA would like to wish Neil at the CMC and Grant, at the Sandford Park Alehouse, all the best in the final judging for National Club and Pub of the Year.”