Feb 4, 2022
The name of Ashton Brewery’s latest beer was chosen via a Beer Naming Competition with the winning entery being announced at the Angry Parrot on February 3rd 2022. 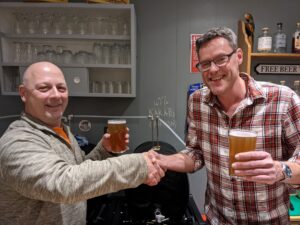 Paul suggested the name Kakapo for Pete’s new brew, a 4.3% Pale Ale brewed Nelson Sauvin hops. The micropub invited customers to come along to the pub for a pint and be inspired to think up a name for our brand new refreshing session pale ale brewed with the unique hops from New Zealand.  The hops are named after the Sauvignon blanc grape which  gives the beer a distinctive white wine fruitiness with flavours of fresh crushed gooseberries.

The Kakapo is a friendly nocturnal, flightless parrot from New Zealand.

Congratulations to our 2022 Pub and Club of the Year